Johannes (Joop) Vreugdenhil (O VIII c.9) was born July 18th, 1904, in The Hague, and died April 28th, 1969. Joop Vreugdenhil went to the Royal Academy of Arts in The Hague. He was a painter, drawer, and lithographer.

The Hague painter Vreugdenhil first painted figurative in an expressionistic style after the Second World War. Initially expressionistically tinted figurative representations until he focused on making geometric abstract compositions in the 1960s. The task he set himself was to arrive at a harmonious arrangement of the rectangular elements with which he built up his compositions. So painting was preceded by a process of careful consideration of dimensions, mutual proportions, shape and color until a balance was reached. He made many trips to France. He was a member of the Hague Posthoorngroep from 1956 to 1962. He was also a member of Pulchri Studio. His work is included in the National Collection. 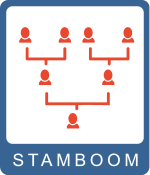